Neapolitan Pizza and the art. The History of pizza probably goes back thousands of years.  Before the 1700s, although  flatbreads (like pitta bread) existed, but were never topped with (what has become a mainstay )  tomatoes .   The tomato  was actually brought to Europe in the 16th century by explorers returning from South America, but they were believed to be poisonous by some Europeans and did not gain popular  until  the poor peasants in Naples began to top their flatbread with them  in the late 18th century . The dish soon became popular , with visitors to Naples seeking out the “poorer neighborhoods” to try the local specialty. Simple, affordable and tasty, a perfect recipe for populariry.   The “Pizza”  soon became popular , with all visitors to Naples.   The word

The word pizza is Italian for pie, but how that word wound up in the Italian vocabulary  boggles etymologists. It may have come from the Latin pix meaning “pitch” or Greek pitta, but others say that it originated in a Langobardic word bizzo meaning “bite.” The common belief is that Italians invented pizza, but a baked bread with toppings has many other precursors in other countries and cuisines. Italy’s version of the dish, especially from Naples, is the one we are most familiar with, though pissaladière from Provence, coca from Catalan, and lahma bi ajeen  from the Middle East all bear a remarkable resemblance to what we now consider  pizza.  “Pizza Marinara” , which does not have cheese, was probably  named because it was traditionally prepared by “la marinara,” the seaman’s wife, for her husband when he returned from fishing trips in the Bay of Naples.”

The Birth of Neapolitan Pizza

In 1780 the pizzeria Pietro…e basta così (which means “Peter …and That’s Enough”- funny name, isn’t it?) was established in Salita S. Anna di Palazzo, in the surroundings of the Royal Palace. This name derived from one of the first owners, Pietro Colicchio, known as Pietro il pizzaiuolo (Peter the Pizzamaker). Pietro Colicchio, having no brothers nor sons, handed over the pizzeria to Enrico Brandi, who in his turn transferred the activity to his daughter Maria Giovanna Brandi, the future wife of Raffaele Esposito.

In 1889 King Umberto I and Queen Margherita of Savoy visited Naples and Esposito baked them a pizza named in honor of the queen whose colors mirrored those of the Italian flag: red (tomatoes), white (mozzarella), and green (basil leaves).  The Rest is truly an amazing  history and pizza Margherita is now  more popular than ever.

The  Pizza is cooked at 900f, in 90 seconds, only  00 flour (Italian fine milled flour) is used , sea salt, fresh mozzarella,  and  San Marzano Tomatoes . It has rules “some organizations claim” as they try to preserve the art. But pizza today (throughout Italy and the world)   is truly diverse,  it has undergone the influence of  regions , cultures , time so many miles, and so many hands  have taken it to new highs (and even some  lows).   The evolution continues today  and each man tends to make it his own art ( and to me) that’s the true  beauty of pizza.

The Pizza School Of New York

We can teach you amazing  styles of pizza at the Pizza School of New York. Not only Neapolitan style but the Best “New York Brick Oven” style Pizza as well. True “New York Brick Oven Pizza” is a crunchier and a more diverse pizza. It is  considered more favorable than Neapolitan Pizza to daily pizza eaters  in America. With fresh mozzarella toppings and “no true rules” just high heat, fresh ingredients, and flavor! But saying the above  does not take away from the original art.   Neapolitan Pizza  (rules and  style)  is now back in vogue and in its pure form is an experience and art that will continue to transcend the decades and all true foodies will  praise it . 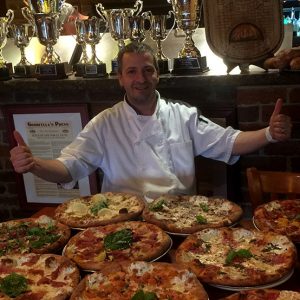 ﻿ Video Transcription Andrew Scudera: Hello, all my friends out

What is a Pizza Consultant?

Hey, are you looking to learn more about

Why the Inferno Series Gas Oven is Amazing

Video Review Transcript Hey there, it's Scot from New York

What Exactly is a Neapolitan Pizza?

Exploring Italy is amazing - the country is

How to Cook Rib-eye Steak in Wood-Fired Oven

In this article, we will give you guidelines